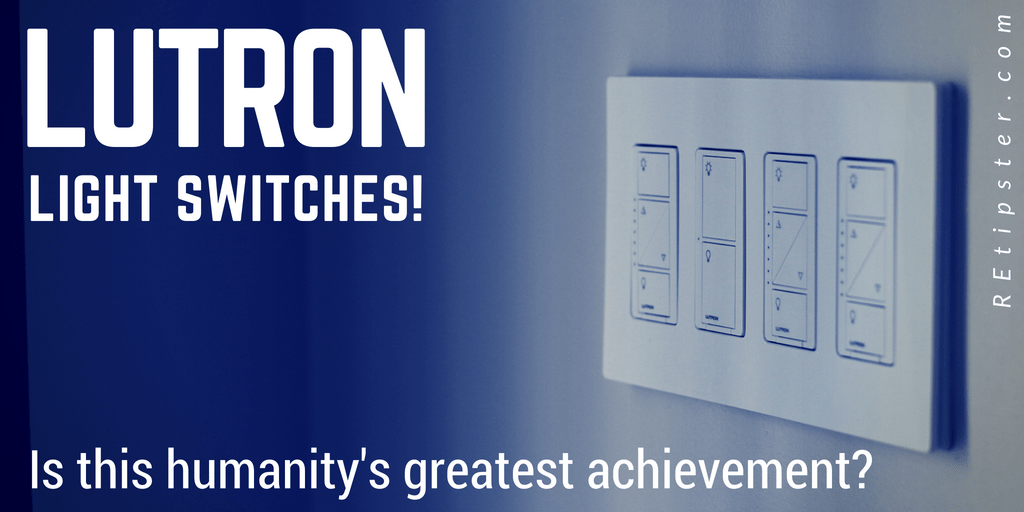 A few months ago, I moved into a new house – and with the new move, I’ve been making a lot of trips back and forth to Lowe’s and Home Depot.

On one of my trips to Lowe’s, I came across a few strange looking light switches from a company called Lutron.

I didn’t realize it at the time, but my life was about to change in a way I never could’ve imagined. I was about to cross over a threshold that would forever alter my future.

As I started looking closer, I noticed there were several different kinds of light switches on the shelf, but all of them fell into one of two categories:

If you’re anything like me – you’ve probably encountered these types of switches in plenty of public restrooms. Why? Because they make a lot of sense (and probably save tons of money on electricity that would otherwise be wasted).

It wasn’t until recently that I realized these weren’t just for commercial buildings… I could put them in my house too and they would be just as useful.

Every time I enter a room and the lights turn on automatically, it’s fun to imagine a full-time servant standing in the doorway, turning the lights on and off for me as I enter and exit (because after all – that’s basically what it’s doing).

It’s also nice to know, with two small children (and myself) in my house, it’s not uncommon that one of us forgets to turn off the lights when leaving a room, and in case that ever happens, these switches will do the job automatically.

In this video, I’ll show you how the Maestro switches work, and perhaps you’ll be able to think of a few practical uses for these in your home (or even in some of the income-producing properties you own).

Another great thing about these switches are, even though they’re a bit more expensive than your average toggle switch, they’re still relatively cheap (less than $20 for a single-pole light switch, and less than $30 for a 3-way application).

When you consider how much power you’ll save with switches that ALWAYS turn themselves off (whether you remember to or not), these things could easily pay for themselves in fairly short order… depending on how bad you are at turning off the lights. 🙂

With the company’s Caseta line – the light switches can be controlled wirelessly – either with a separate remote control or with an app on your phone.

In order for the Caseta switches to operate properly with your phone, you’ll also have to buy the Caseta Wireless Smart Bridge, which works in conjunction with your wireless router. It’s not hard to install or set up, but it is another step you’ll have to get through if you want to use these switches to their fullest extent.

One great thing about the Caseta light switches is, you can turn your lights on, off, and even set them on a pre-programmed schedule, all from the convenience of your phone – and this opens up a lot of possibilities.

In this video, I’ll give you a quick overview of the Caseta switches, these are pretty cool too!

Caseta light switches a bit more expensive than the Maestro line – but they also require some more sophisticated technology to operate. I think this kind of switch can be used more sparingly (and honestly, I don’t think the technology is quite as useful as the Maestro line), but when you do need this kind of thing, it’s great to have available.

Now, as cool as this technology is, I’ll be the first to tell you – these switches are NOT the right fit for every single room in your home.

For instance – with the Maestro occupancy sensor switches, I think you should start by asking yourself these questions:

If you answered YES to either/both of those questions, then your room is probably a great fit for a Maestro light switch.

However, if you’re thinking about putting these in any room where you DON’T always want the lights on (e.g. – bedrooms, kitchens, TV rooms), then I wouldn’t recommend it. They’ll probably end up being more annoying than helpful.

One switch, in particular, is model MSCL-OP153MH. Here’s a tutorial that explains all the different ways you can program it:

I got mine from Lowe’s, but you can also get them from Home Depot or Amazon.

For the Caseta wireless switches, I think there are only a couple of instances where these make sense.

If you’re considering these for your property, these are the questions you should be asking:

If you answered YES to either/both of those questions, then it’s probably a great fit for this kind of light switch.

However, if you don’t need to set your lights on any kind of schedule, and if you won’t need to flick the switch remotely, these are definitely overkill – and will most likely serve as a more confusing version of a regular mechanical switch.

I will say, most of these Caseta light switches do look a bit confusing at first glance. They probably could have minimized the number of buttons (e.g. – a single button that turns it on and off, and a sidebar that functions as a dimmer) to make it simpler… but in any event, once you get familiar with what each button does, they’re not difficult to operate at all.

Why I Love Both

Aside from the obvious conveniences that both types of switches offer, another thing I love about BOTH is that neither of them requires any batteries to operate. They get all of their power directly from the wiring in your wall, so there’s no need to constantly monitor and change them years into the future.

I will say, there are a few exceptions with the Maestro occupancy sensors that operate remotely and do require one small battery, but these are only needed in special situations (and the batteries are supposed to last for about a decade, so they don’t require much attention). For most small and mid-sized rooms, the basic light switch occupancy sensors will work just fine.

Again, I’ll be the first to admit, these kinds of “smart home technologies” may seem a little frilly and unnecessary (because let’s face it, they kinda are), but even so, one thing is for sure… I have been LOVING these things.

I have a stairwell that stops halfway down, turns 90 degrees, and continues to the basement. For this kind of unique situation, you’ll want a battery-powered, corner-mounted occupancy sensor (so it can see the top and bottom of the stairs from a single vantage point). This is the only situation where I’ve had to rely on a battery-powered sensor, and so far it has worked flawlessly.

Most small bathrooms only have one light switch (single-pole). These are the most basic and least expensive type of occupancy sensor switch from Lutron. The occupancy sensor can see 180 degrees, so it should turn on the second you walk in the room.

Some bathrooms (particularly, those with showers) are set up in such a way that these basic switches can turn off when the shower curtain is drawn (because the occupancy sensor doesn’t sense any motion, even though the bathroom is still occupied). In these types of bathrooms, you might want to consider a “dual tech” sensor, which is less likely to turn off without warning (because it can sense motion AND sound).

My garage is actually a 4-way application, because there are 3 different switches that can control the same set of lights. In this case, I needed to replace all three switches in order for the whole system to work properly.

The placement of light switches in a garage aren’t always set up in such a way that they can work properly and sense movement in every part of the room – so if you have a situation like this, you might be better off using this battery-powered, wireless sensor and this type of switch.

Both of my storage rooms are 3-way applications, and when there are two different switches that operate the same set of lights, it’s possible to only replace one of the two switches with the Maestro multi-location switch. However, in order to do this, it also requires that you change the wiring on the companion toggle switch (you don’t need to buy anything new, but you do need to make sure it’s wired correctly, in order to avoid messing up the occupancy sensor switch). I had to call Lutron’s customer support on this, and they cleared up my confusion very quickly.

Since I shoot videos in my office pretty regularly, I need to be able to control the lighting with a dimmer switch. Fortunately, Lutron also makes an occupancy sensor switch that ALSO functions as a dimmer (so when it turns on, it goes directly to the levels your set). I love this switch, and it has worked out very well for me so far.

My front porch is the perfect place (and probably the only place) in my house to set up the pre-scheduled on and off switch. I’ve actually got two separate lights in the front of my house, one of them is a hanging pendant above the front porch (which can get very bright – which makes it a great fit for the Caseta dimmer switch), and the other is a wall sconce, which is a fairly dim light (so it makes perfect sense for the basic Caseta on/off switch, which is slightly less expensive).

As a side note – Lutron has some pretty cool light switch plates, but they don’t come with most of the Maestro switches. If you want your light switch to look as cool as possible, you’ll have to buy these separately.

One last thing I’ll mention is this: While some of these switches were slightly confusing to install (I’m not an electrician, so it took a few attempts and shocks to figure them out), Lutron’s customer support line was absolutely EPIC. They were available for me 24/7, and every person I talked to was extremely helpful and easy to work with. This is one of the best examples I’ve ever seen of customer service done right.

Are Those Home Renovations Actually Worth The Money?

Nest Cam Review: Is This the Future of Home Security?