Stagflation is a term that combines the words stagnation and inflation. It refers to an unusual economic condition where prices are rising despite slow or flat economic growth.

How Does Stagflation Happen?

Stagflation is a portmanteau of the words “stagnation” and “inflation.” In a nutshell, it describes an unusual economic condition with rising prices (characteristic of inflation) but high unemployment and slow or stagnant economic growth.

During periods of stagflation, consumers’ spending power decreases, which means they are spending more on commodities than they would otherwise (similar to inflation). The country’s economic output decreases as customer spending slows and businesses lose sales. As a result, they suffer lower profit margins and their stocks plummet[1]. Ultimately, they are forced to cut costs elsewhere, such as laying off their workers[2], in order to stay profitable. 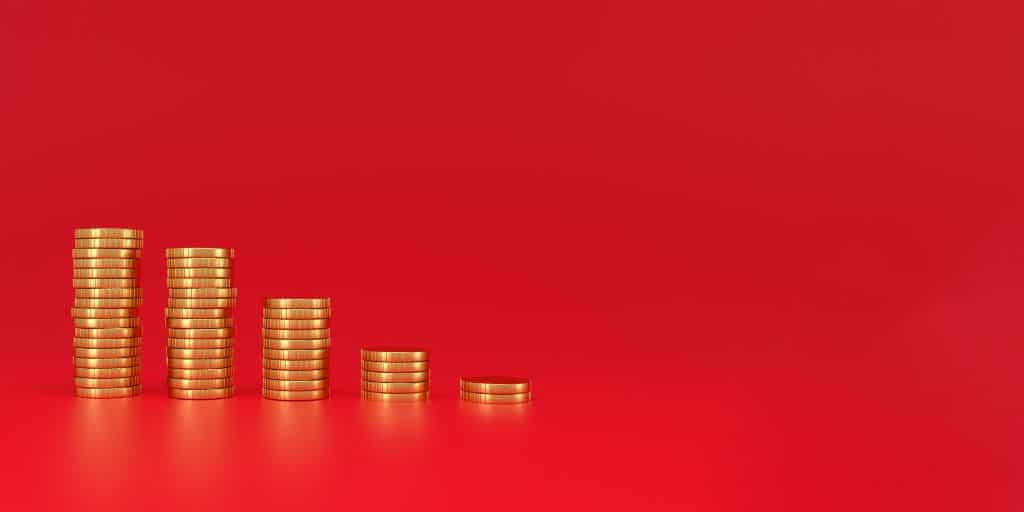 The problem can be hard for governments to solve because efforts to reduce inflation—like raising interest rates or cutting spending—are ineffective at addressing stagflation. In fact, it may even make the problem worse, such as increasing unemployment.

The term was first used in the 1970s when the U.S. economy experienced a mix of rising oil prices, high levels of inflation, and high unemployment[3]. Oil prices increased and the cost of living grew, which crippled supply chains. Supply chain disruption, in turn, increased the cost of goods and services. The weakened economy led to two economic recessions and caused double-digit unemployment[4].

Normally, inflation is low when the economy is weak because there is less demand and more supply. Prices tend to fall as consumer demand drops. Inversely, inflation is correlated with rapid economic growth, because demand outstrips supply.

However, this is not the case with stagflation. In an economy that experiences stagflation, prices increase despite slow economic growth[5], leading to high unemployment. Chronically high unemployment alongside slow, flat, or declining growth are the characteristic signs of a stagnant economy[6].

In general, it is helpful to understand each term in its own vacuum.

Inflation refers to the sustained rise in the prices of all goods and services in an economy over time[7]. As the dollar’s purchasing power falls, the cost of goods and services will gradually increase. Typically, low and steady inflation leads to healthy interest rates and low unemployment. Too much inflation, however, can be harmful because consumers will cut back on their spending, businesses will lose sales, and the economy weakens as a result[8]. 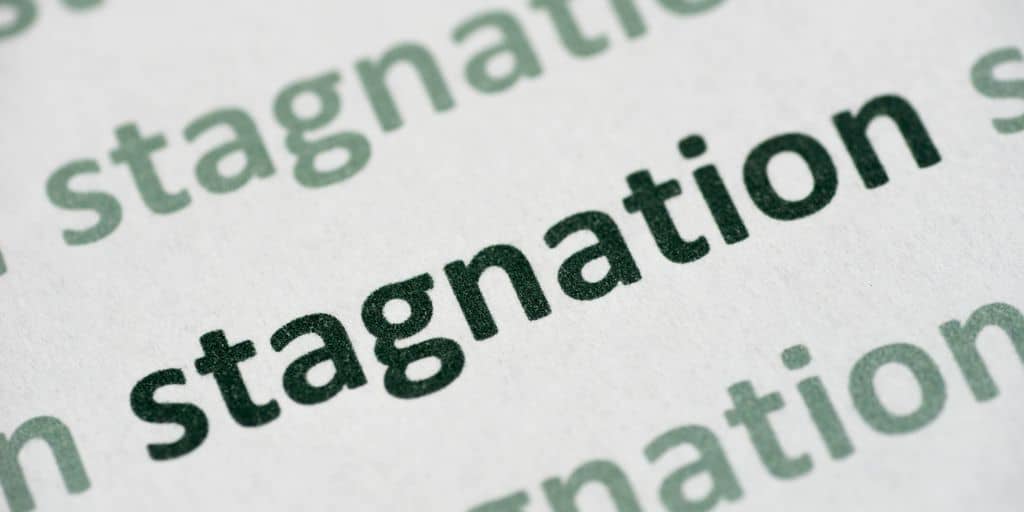 Stagnation, meanwhile, is an economic condition characterized by high unemployment and slow GDP growth. It is marked by zero wage increases, profits, and price levels.

Note that an otherwise stagnant economy with its consumer price index (CPI) consistently dropping is experiencing not stagflation but deflation.

Most economists agree on three main causes of stagflation[9], as follows.

Supply shocks refer to a decrease in the supply of goods and services, typically caused by unexpected events like geopolitical turmoil or natural disasters with prolonged effects (like the COVID-19 pandemic). The reduced supply of raw materials in the market, such as oil or silicon, dampens economic growth, eventually leaving people with less purchasing power. 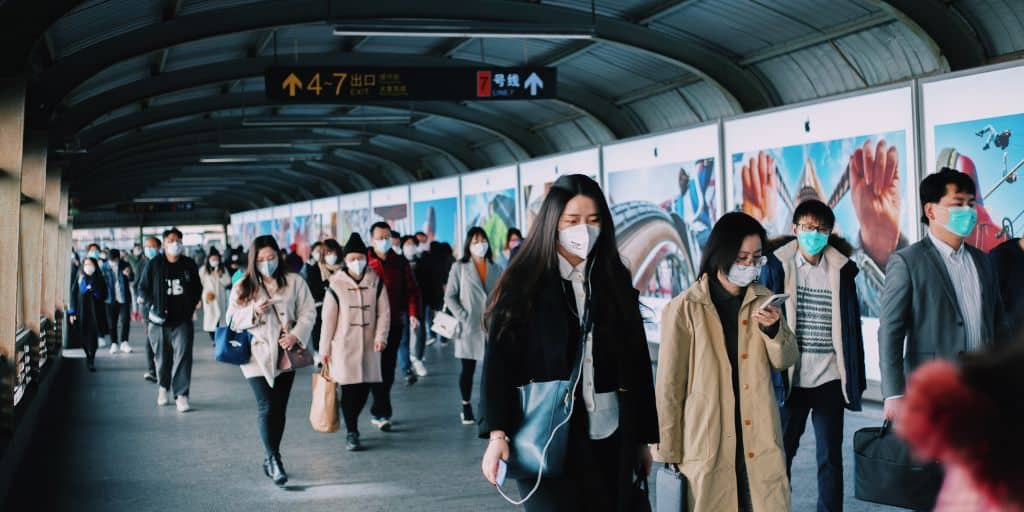 The COVID-19 pandemic is an example of a global supply shock.

This happens when a government overprints currency, a situation where there are “too many dollars to chase too few goods.” This action leads to inflation, which can worsen an already stagnant economy and thus lead to stagflation.

Government policies at the state (and in the U.S., the federal level) can disrupt usual market functions. Stagflation happens when there is a conflict between policies that slow economic growth and increase inflation at the same time. Some examples include implementing tight business regulations and increasing taxes and interest rates in an economy that is already having anemic growth.

How Can Investors Protect Themselves From Stagflation?

Individual investors can still protect their portfolios from stagflation, or at least minimize the impact of rising prices and a slowing economy.

Commodities like agricultural goods, precious metals, and oil are good hedges against stagflation. Commodity investments are prudent because their underlying assets will always be in demand regardless of how well the dollar is doing and how fast an economy is growing. 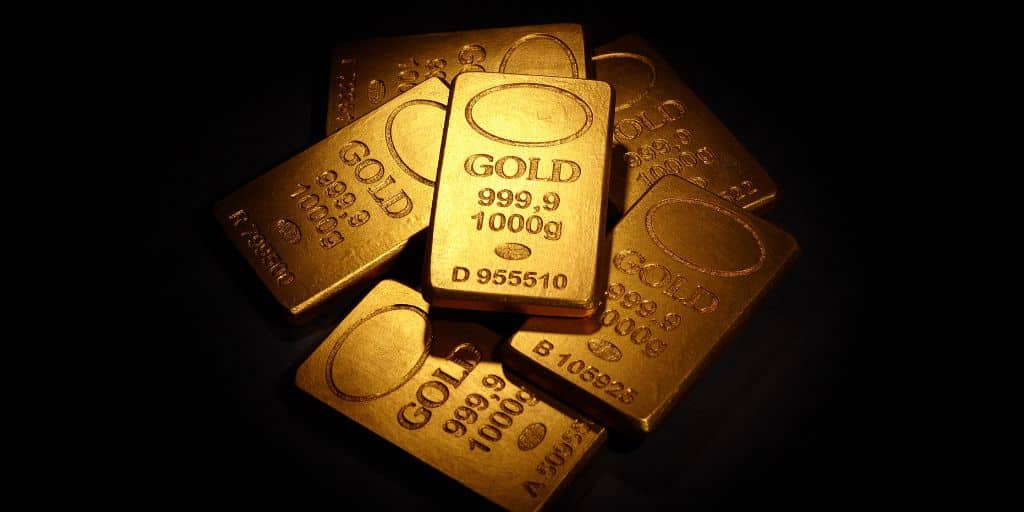 Stocks and bonds do not perform well in conditions when prices are rising and the economy is weak. However, some industries or businesses can weather the price increases accompanied by inflation. For example, tech stocks maintain profitability in such conditions, as history shows[11].